Katie took another drag of her cigarette, and then thumped the remainder into the air like a paper football.  She stepped away from the rock she had leaned against for  hours, and wiped at the tears that drained down her dusty face.  What had made her think love could flourish again? She sighed.

The sun was low on the horizon.   It was time to go.

Had she really thought he would come?

She had never been one to believe that psychic mumbo-jumbo shit, but the woman…the woman caressing the glass ball… she had been so convincing.  She had even known “their place”.  No one knew of their place…no one.

Turning her back to the twin stones, Katie began her descent back down the mountain. She had only taken a couple of steps when something  fluttered by her ear and fell to the ground.  Katie looked down.  There by her boots lay the cigarette she had tossed away.

Katie smiled…she knew he had come.

(This short story was first published in my other blog Redhead Reflections)  (Come on over for a visit!)

Maggie arose from her slumber to begin the night’s work.  The work had become routine, and so she proceeded with little thought. 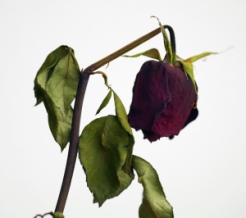 Looking at her surroundings, Maggie noticed the moss ridden tombstones and, grass that had been trampled by deer, searching for solitude.  Her eyes drifted to a withered flower that had died in its vase years ago.  Maggie sighed.  No one came around anymore, not even the ground’s keeper.

This state of affair saddened Maggie, but what could she do?  No one heard her anymore because there was no one to listen.  She knew it was her fault, but she had grown tired of the kids and their silly candles.  At first it had been entertaining, but with the passage of time, their horror filled eyes and shrill screams, only bored her. And so she kept her silence and turned a deaf ear to their Ouija board.  After a while the kids stopped coming, perhaps thinking their time better spent at the nearby beach.  So now it was only her, and Maggie was lonely.

Each evening, upon the sun’s decent, Maggie walked among the headstones and whispered the names chiseled in gray.  This was the only thing that gave her a sense of existence.  She reasoned, within herself, it was her way of honoring the dead.

Night after night she made her rounds.  She no longer needed to look at the names.  She knew them all and so she drifted from one to the next until each name, had been spoken in the dark.  When her mission was complete she drifted back to her place to take her rest.

Her place was just as ram-shackled as the others, but on this particular night, Maggie studied her abode.  Once again her eyes fell to the dead flower within its vase.  It had been there for as long as she could remember.  The flower had wrapped itself in a cloak of death, that was dry and crumbling.  She studied the brown decay and realized, for the first time that there were none like it in all the garden.  Someone, God knows when, must have left it there for her.  Slowly Maggie drifted to the flower and reached to touch it with a wispy hand.

The moment her essence touched the decay, the flower dropped its cloak of death and

bloomed into a beautiful rose.  Maggie felt herself bathed within a golden light.  She looked to its source and saw a man she knew to be her husband; and in that moment, what had been her earthy life, once again became a memory.

She looked to her soulmate, with his hand outstretched and heard the question in his eyes, “My darling…what took you so long…?”

Maggie’s lonely heart, overflowed with peace, and without hesitation she flew into her soulmate’s arms, and finally passed to the other side.